The ten minute timer trick (described here) for beating procrastination may appear simple, and it is, but there’s some intriguing – and very useful – psychology behind it.

First, a definition of phobia:

phobia n. a persistent and irrational fear of a specific situation, object, or activity, which is consequently either strenuously avoided or endured with marked distress.” [APA Dictionary of Psychology 2nd. Ed. p. 792]

Procrastination is a phobia!

The ‘strenuously avoided’ part is the procrastination.

While conceptualizing procrastination as a phobia is useful, I find this definition of ‘phobia’ is unhelpfully patronizing. In the procrastination context, the ‘persistent and irrational fear’ is actually quite rational – if not overly adaptive.

The purpose of procrastination

Believe it or not – procrastination has a purpose – and that is to protect you from failure.

The subtext of procrastination is that if you don’t try then you can’t fail.

And if you don’t fail, then your tribe won’t guess your guilty secret that you are a worthless failure.

And if they don’t realize you are a worthless failure, they won’t chuck you out of the cave.

And if your tribe doesn’t chuck you out of the cave, then you won’t perish from a nasty case of sabertooth tiger).

While rational at a primal level, it is problematic in these non-paleolithic times when our brains can’t tell the difference between sabertooth tigers and failure. And it is a very real psychological terror.

The good news is that since procrastination is a phobia, it can be treated like one.

A common treatment for phobias of any kind, including arachnophobia (fear of spiders), is graded exposure therapy – also known as desensitization or habituation.

Graded exposure therapy involves gradual exposure to the avoided stimuli. For example, someone with severe arachnophobia may be asked to stay in a room with a picture of a spider on the far wall. (This may seem extreme, but a few decades ago arachnophobic postal workers threatened to resign following the issue of a set of stamps featuring spiders.)

Typically, in this situation, the person will initially feel a strong panicky desire to avoid the aversive stimuli – in this example the spider picture.

However, if they don’t run away, the anxiety typically subsides in less than a few minutes.

This process is called ‘habituation’. The person habituates, or gets used to, the previously feared stimuli.

During graded exposure therapy, the person is encouraged not to flee the source of anxiety like they usually would. And once the person’s anxiety has subsided, the spider picture is moved closer.

Again, they will experience a spike in anxiety and an urge to flee the spider picture. But if they don’t run away, their minds are given the opportunity to realize the threat isn’t ‘real’.

The psychological fear is real: The physical danger is not

And, once their brains realize the picture is actually not a sabertooth spider, anxiety will naturally and quickly subside.

Then the spider picture is moved closer again. The process continues until the person has eradicated their phobia and can handle a real spider without anxiety. Personally I think that’s taking it a bit far. I theoretically approve of spiders, but I’m sure they don’t like being handled.

Anyway, a key point is when you’ve been avoiding something – whether a spider, study, an assignment, a project, or writing your novel – there’s usually some form of fear involved.

Another key point is by continually avoiding the feared object, we deny our brains the opportunity to overcome the anxiety by realizing that while the ‘thing’ you’ve been avoiding may feel like an object of death – it really isn’t.

When we procrastinate, it usually means we have developed a phobia. The underlying phobia is the fear of ridicule, criticism, failure, and rejection. But these primal fears have become associated with our study, assignment, project, novel, or…thesis.

I assure you, I developed a powerful Ph.D. thesis phobia. It became quite the repellent object of dread.

I was able to overcome my thesis phobia by treating it like the giant spider Shelob of Lord of the Rings fame; using graded exposure therapy. 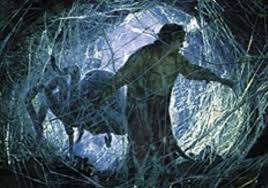 Fortunately, procrastination can be overcome in the same way we overcome any other phobia.

Procrastination can be overcome by gradually increased exposure to a very small amount of the feared stimuli. In the arachnophobia example above, the habituation process began with just a tiny amount of spider – a spider picture on the far side of a room – that gradually got closer and closer.

When curing a procrastination phobia – you can also work with time.

Just start working on your dreaded thing for a tiny, non-scary, amount of time. 10 minutes, or even a friendly five minutes. It’s hard, but it usually takes less than a few minutes for the anxiety – and urge to flee – to subside. Hence the anti-procrastination trick of ‘just’ working on some task you’ve been avoiding for a mere 10 minutes.

Of course, like graded exposure, you can gradually increase the amount of time. My Ph.D. is living proof of the effectiveness of this simple technique in overcoming procrastination.

So. What potential success have you been avoiding?

Comment below: Help me infect others with hope. I’d love you to share either a current struggle with a phobia – whether spiders or procrastination – or how you overcame a phobia. I read every comment.

FREE download “How to get the mind-focusing effects of Ritalin – without taking the drug” How do you think I finished my Ph.D. thesis on time? This strategy is the big gun of behavior psychology. It provides powerful motivation – but can backfire if applied incorrectly. Subscribe and download the FREE step by step instructions and start finishing!  Click here to subscribe and get the free procrastination-busting strategy

Let the children cry – Warning! A grim read. Possibly worth it if you were shamed for crying as a child